On the 1st of November four drilling ships from Myanmar started exploration for oil and gas reserves within 50 nautical miles south west of St. Martins Island, in Bangladesh. A South Korean company was awarded the oil and gas exploration contract in that place and two Myanmar naval ships escorted the drilling ships. Three naval ships of Bangladesh went to challenge them but the Myanmar Navy responded by alleging that the Bangladesh Navy ships are trespassing.

This escalated the maritime boundary disputes between Bangladesh and Mayanmar. Mayanmar vowed to continue with the exploration despite the territorial dispute with Bangladesh. Bangladesh Government warned the Myanmar envoy in Bangladesh to immediately suspend all activities within the declared maritime zones of Bangladesh in accordance with the Territorial Waters and Maritime Zones Act 1974 of Bangladesh and sent a high level delegation to Myanmar.

None of the countries in this region so far claimed their marine boundaries before the United Nations (UN). India and Myanmar agreed territory between themselves but they need to solve the maritime boundary issues with Bangladesh as they are set to file their claim to the United Nations on June 29 and May 21, 2009, respectively. Under the U.N. Convention on the Law of the Sea (UNCLOS), Bangladesh too has to file its claim within July 27, 2011.

Bangladesh claimed in 2006 that Burma had encroached 18,000 square kilometers into Bangladesh waters and floated gas exploration tenders. The first round of talks between Myanmar and Bangladesh was in April this year but ended inconclusively in Dhaka. Both the sides then agreed to continue with the dialogue to reach a conclusion and meanwhile refrain from intruding into the disputed area for exploration.

Bangladesh has so far refrained from energy exploration in disputed waters. But Myanmar did not. So the country has the right to protect its sovereignty and has demanded the Burmese ships withdraw until a maritime boundary can be established through talks.

The senior official from Burma’s foreign ministry told Reuters: “We have no reason to stop the exploration activities since these blocks are located in our exclusive economic zone. We will go ahead with it.”

Only a couple of months ago the Vice Chairman of Myanmar Ruling Government during his visit assured Bangladesh that Myanmar will not embark on any drilling in disputed areas of Bay of Bengal and will resolve the boundary dispute through bilateral discussions as per UN guideline. Bangladesh also pressed for early finalization of the demarcation. The next meeting between the parties is due in November 16-17th. Now why Myanmar is going into the offensive? 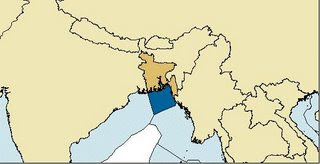 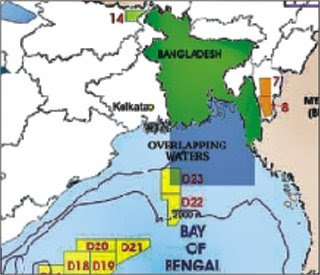 The main dispute on maritime boundary delimitation between Bangladesh and Myanmar centres around Bangladeshi views to demarcate in equity basis North to South while Myanmar wants it for eco–distance system in East to West boundary.

(1) delimitation is to be effected by agreement in accordance with equitable principles, and taking account of all the relevant circumstances, in such a way as to leave as much as possible to each Party all those parts of the continental shelf that constitute a natural prolongation of its land territory into and under the sea, without encroachment on the natural prolongation of the land territory of the other;

Barrister Harunur Rashid has a legal view of Bangladesh’s claims.

If we fail to stop aggression of neighbours to encroach our maritime boundary through proper diplomatic initiatives we must take resort to UN Convention and move to international court of justice to resolve maritime dispute. We can not afford to compromise our sovereign right on resources. [..]

According to latest reports Myanmar stopped oil and gas exploration in deep-sea blocks in disputed waters in the Bay of Bengal on Thursday, a day after Bangladesh asked China for help over the row. But they are yet to remove vessels and equipment from Bangladesh territory.

It cannot be denied that Bangladesh is now exposed to international oil and gas politics. We will see more such conflicts between India and Myanmar before 2011 when the maritime boundary is scheduled to be fixed by UN. The government should give more focus to the demarcation issue and employ proper experts and resources to bolster Bangladesh’s case.

It is important that we make persistent and determined efforts to protect our interests. Bangladesh cannot afford to lose in the bargain for its legitimate share of the oil and gas rich Bay, which will only weaken our case for retaining the territorial waters that belong to us as per international laws.