The Economist is a leading news media of the world. For the last few months it published some very controversial reports about Bangladesh or more appropriately against the present democratic government of Bangladesh. It discovered hotly debated news of ruling Awami League taking huge sum of money from India to influence election. It was challenged and “The Economist” failed to provide any credible evidence. We wrote “The Economist owe an apology to India and Bangladesh”.

The world knew that present ruling alliance of Bangladesh won landslide victory in the last credible adult franchise for their very appealing election pledges and promises. Citizens of Bangladesh and the world witnessed a vey corrupt and virtually non functional Government ruling Bangladesh from 2002-2006. Although present government despite of its sincere efforts failed to achieve many 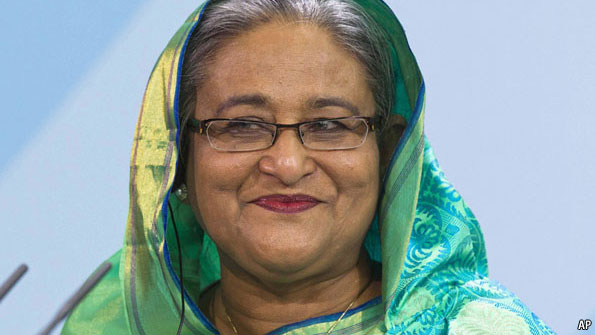 of its election pledges yet any critic must agree overall situation of the country is definitely much better than what it used to be from 2001-2006. Yet it is unfortunate that a widely circulated newspaper like “The Economist” is carrying out ill motivated propaganda against the government and people of Bangladesh. Recently in a controversial report it requested New Delhi to stop Sheikh Hasina from ruining Bangladesh. Is Bangladesh really being ruined by Sheikh Hasina or she is rebuilding Bangladesh from the virtual ruins of the past failed governments? What does The Economist want?

We are not aware what made the media and the reporter to write such a weird report? But since it is published let us try to analyze it in depth. Let us reread some recent News. Two Bangladeshi women in recent times climbed to the top of Mount Everest and let fly Bangladesh flag. Bangladesh won another Bangladesh in the Bay of Bengal through successful resolution of Maritime Boundary dispute with Myanmar, Bangladesh reached the final of Asia Cup in Cricket beating strong rivals India and Sri Lanka and almost won it.

Despite of worldwide economic recession Bangladesh economy is managing to survive through wonderful works of Farming community and wage earners. The trial of war criminals and convicts of many terrorist activities and major acts of corruption are proceeding smoothly. Bangladesh is getting bumper cultivation of crops every year for much disciplined distribution of agricultural inputs – seeds, fertilizer and diesel. No one is going hungry anywhere. The overall law and order situation in rural areas is much better than before. All these are possible due to dynamic leadership of very hard working Prime Minister Sheikh Hasina. No one and even she herself will deny that everything is going smooth. But there is no lack of committed efforts from her.In this situation the report of “The Economist” requesting India to stop Hasina from running Bangladesh is definitely an ill motivated propaganda. She is leading Bangladesh towards Digital Bangladesh. Despite several challenges digitization is advancing and people have started getting benefit of it.
We also see some issues and challenges. Government so far failed to find clues of some murders like that of Journalist couple Sagar –Runi and Saudi diplomat. Government could not find out abducted opposition leader Ilyas. Government is struggling relentlessly to confront deteriorating Energy and Power Crisis. Government is also endeavoring to confront Grid locks of major cities and diabolic road communication network countrywide. Government is also endeavoring to resolve various unresolved souring issues with India. Ruling Bangladesh of 150 million people living in a small plot of land with very limited resources is not an easy task.

Opposition alliance is boycotting parliament in childish excuses. They are not playing the role of a responsible shadow government. They are not dealing with the crisis of national life. It does not require the research of a post graduate scholar to find out that opposition alliance is terribly upset from stubborn attitude of present government for punishing war criminals, corrupt syndicates and terrorist of the past failed regime. In a democratic country people elect its leaders through adult franchise at regular interval according to constitution. After 1975 the military autocrats carried out surgery to our constitution to legitimize their undemocratic rule and till 1990 institutionalized corruption. After autocrat Ershad was overthrown in the popular upsurge BNP came to power through credible election under an agreed interim government. But that government again led the country in the same undemocratic manner. People again formed unity and forced autocrat Khaleda Government to accept the concept of Neutral Care Taker Government. Election of 1996, 2001 were conducted under Care Taker Government. In the original agreement of major political front it was written that only three consecutive elections would be conducted under CTG . The government of Khaleda Zia led 4 party alliances riding on Jamat –Shibir and Hawa Bhaban dominated mafia syndicate made Bangladesh a heaven for unbridled corruption and happy hunting ground for anti liberation terrorists. Several opposition MPs, leading journalists were murdered, there was state sponsored attempts to wipe out senior leadership of major political party Bangladesh Awami League at the heart of the capital city in the broad day light. There was simultaneous grenade explosion in 53 districts, several incidents of grenade attacks in Cinema hall, court made the nation panicky.ISI made Bangladesh safe haven for training terrorists to conduct atrocities inside Bangladesh and into India .Huge consignment of deadly weapons was safely unloaded at CUFL Jetty under the supervision of NSI and DGFI.

BNP led 4 party alliance under suggestion of its Law Minister Barrister Moudud Ahmed deliberately misinterpreted the provision of care taker government facilitating their party cadre for leading the incumbent Care Taker Government. People of all walks of life were comining under the umbrella of Grand Alliance to protest the free style corruption, acts of terrorism. The government set their own persons carefully at all critical key positions- Army Chief, Police, Intelligence Agencies, and Secretariat. But all these boomeranged on them. Taking advantage of chaos and confusion emanating from the street confrontation and agitation army backed interim government took over. Some ambitious army officers mostly beneficiaries of BNP led regime maligned politics and politicians in so called” Minus two formula”. Some ambitious army general also tried to create a political party. In the name of eradicating corruption some generals sucked and siphoned huge sum of money. For almost two years Bangladesh was governed by undemocratic interim government. People witnessed the dark side of unelected undemocratic government. Under international pressure and in the wake of growing resentment in the country Interim Government was compelled to go for election after amending the controversial voter list where millions of fake voters were identified. Awami League led Grand alliance got overwhelming majority.

From 2009 till now government survived several catastrophes and disasters, many of which were tailored by anti Bangladesh subversive forces. About 70 very accomplished mid level to senior Army Officers were brutally killed at BDR HQ only few months after new government took over. Government inherited a virtually non functional power and energy sector. Despite serious limitations and handicaps government made the country almost free from acts of terrorism. In three and half years there have been no incidents of Grenade attacks on opposition rallies. Opposition leaders including Khaleda are criticizing government actions as and when required. Print and electronic media is free than ever before. In talk shows people are criticizing any government actions with full freedom.

But government has some failures in some areas which they are always admitting and working for improving those. This government is committed to try the war criminals, try the terrorists and corrupt syndicates. These group and their beneficiaries are also in a mission to unleash propaganda against the government in international media. Sri Lanka Guardian, the Economists are among those media which are in the propaganda trail.

We are proud Bangladeshis. We created Bangladesh in 1971 not to be dominated by India or anyone. We are endeavoring to create Bangladesh that we dreamt in 1971 and for which many of our dearest friends let down their lives. Sheikh Hasina lost almost all of her near and dear ones. She herself survived several attempts on her life. She could be leading the life of a peace loving Bangladeshi housewife if history did not bring her here through mid night massacre of 1975. Yet she is not above mistakes. But it does not mean that the Economist or the any other media outlet in the world has any right to suggest  ‘intervention’ over Bangladesh.


480 Responses to “What Does the Economist Want?”