Compressed natural gas (CNG)as a vehicle fuels was first introduced to Bangladesh in 1982 through a World Bank pilot project. In 1999, four private companies obtained permission to set up about 5 stations each (source).

This “greener” fuel alternative has sunken the transport cost for many vehicle owners. The high price of conversion of Engine (Tk. 56000 eq. US$800) did not deter many people from using this as fuel cost becomes 5 to 10 times cheap when using CNG. Moreover, it provides clean air by reducing harmful emission. 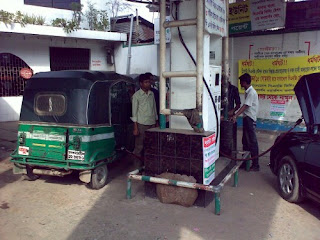 The government vehicles are gradually being converted to CNG. Many public transports including buses are fueled by CNG and autorickshaws in Dhaka are compulsorily powered by CNG. When Bangladesh government banned the Two-stroke autorickshaw engines in 2003, there was a 30 to 40 percent drop in particulate pollution in Dhaka.

Natural gas is supposed to be Bangladesh’s only significant source of energy. So the CNG sector had a promising future. But suddenly everything seems to be stalled. The CNG sector is running into crisis according to Energy expert Kh.A.Saleque:

* There are allegations that without making proper feasibility study authorities through corrupt practice accelerated permissions for setting up CNG filling stations in already saturated areas.

* The Government served double blow to CNG by al most doubling feed gas price to CNG and increasing CNG price significantly in one step.

In year 2002, there were only five CNG filling stations in Dhaka. By 2005 it grew to 75 and now approximately 500 stations are operating. CNG refueling stations consume only 5 per cent of the gas production. Approximately 300,000 of the 1 million vehicles on the road are now CNG-fueled. A typical CNG station is equipped with a double hose dispenser with two double nozzles and would serve between 300–500 cars in 16 hours station access time. So there is already a demand of 500 more stations to provide smooth CNG refueling service.

The government has recently banned CNG stations from selling CNG from 3PM to 9PM. This has created long queues in the filling stations forcing many vehicle users to opt for gasoline consumption instead.

I share with you one bitter experience of mine which I faced last Saturday. The CNG autorickshaws in Dhaka was a good transport option back in 2004-2005 when it ran on meter and there was a law that they should go everywhere where the passenger wants to go. But now it is completely a mess. They don’t run on meters, will not go everywhere and the passengers has to agree to exorbitant price when they have no alternative. I started from Paribagh towards Gulshan 2. The CNG driver requested me to allow him to refuel his CNG tank as 3PM was approaching and there will be no refueling for next 6 hours. But at the end it cost me 40 minutes (equivalent to journey time) as he had to be in a long queue in a CNG station. Who is responsible for the loss of opportunity cost of him and mine? 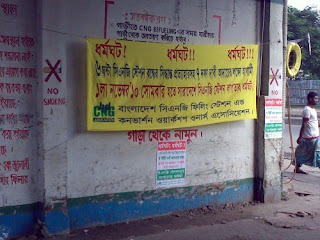 The Owners of CNG refueling stations is protesting the Petrobangla move to raise the CNG price by sending a proposal to the Bangladesh Energy Regulatory Commission (BERC). The price rise will be from Tk 16.53 (25 cents) to Tk 25 (36 cents).They will go on strike from the 1st of November as the banners and posters say. The common citizen will suffer and more and more people will switch back to gasoline which will be a sad ending to a happy story.