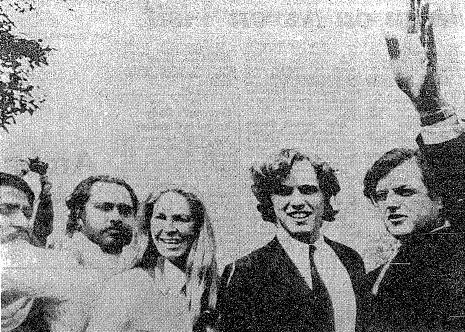 When we were being silenced, he lent us his voice. When we found freedom, he came to us.

A generation later I want to say thank you.

Today Senator Edward Kennedy took a courageous stand against the excesses of an imperial president. Behind him stand the majority of the American people whose voices have thus far been ignored. Senator Kennedy lent us his voice today.

Thirty five years ago when the Pakistani military was slaughtering my people by the millions, President Richard Nixon quietly offered arms to continue the killings. Along with Senators Frank Church and William Fulbright, Senator Kennedy took to the floor of the United States Senate and spoke out against the atrocities. His was one of the lonely voices in the United States government that defended the right of the Bengali people to exist. He spoke out against the massacres, the rapes, and the persecution when the Nixon administration chose to look the other way.

On August 11, 1971 Senator Kennedy visited Bengali refugee camps in Calcutta, India. There he visited with some of the 10 million Bengalis who had fled the massacres in East Pakistan. Kennedy was scheduled to visit East Pakistan but was refused entry by the Pakistani government. Nevertheless, with his visit, Senator Kennedy helped shine the world’s spotlight on the ongoing genocide. With his visit, he became a friend of the Bengali people.

On December 16, 1971 Bangladesh was liberated from Pakistan. On Valentine’s Day the following year, Senator Kennedy visited the newly formed nation. Kennedy arrived in the capital city, Dhaka, as the crowds shouted “Joi Kennedy!’ (Victory to Kennedy). He was mobbed everywhere he went. He made his way to Dhaka University, where the Pakistani killing spree had begun less than a year ago:

About 8,000 people crowded into the university courtyard and jammed lecture hall balconies and roofs, to hear the most popular American among Bengalis tell them what they have been telling themselves since their war for independence began last March.

“Even though the United States government does not recognize you,” Kennedy said, “the people of the world do recognize you.”

In his speech, Kennedy drew parallels between the liberation of Bangladesh and the American Revolution. He said America had prospered despite people who predicted it would collapse following independence, and so would Bangladesh.

Kennedy’s early support for the Bengalis’ fight  against Pakistan’s army has made him a symbol of the friendship with the United States which the Bengalis desperately want. When criticizing President Nixon for supporting Pakistan, Bengalis invariably mention Kennedy as the example to prove that the American people sympathize with their cause.

Over the next thirty five years Senator Kennedy has remained a friend of the Bengali people. Like his brother Bobby, who shook the foundations of apartheid with his courageous speech at Cape Town University, Edward Kennedy symbolized to nearly a hundred million Bengalis the best of America and American ideals.

In the decades since his 1972 visit to Bangladesh, Senator Kennedy has invariably stood with the voiceless and has given them voice.

On June 8, 1968 Edward Kennedy eulogized his brother Bobby at St. Patrick’s Cathedral in New York City. With his voiced breaking with emotion, he said of his brother:

My brother need not be idealized, or enlarged in death beyond what he was in life, to be remembered simply as a good and decent man, who saw wrong and tried to right it, saw suffering and tried to heal it, saw war and tried to stop it.

Those of us who loved him and who take him to his rest today, pray that what he was to us and what he wished for others will some day come to pass for all the world.

As he said many times, in many parts of this nation, to those he touched and who sought to touch him:

[Writer’s NOTE (1/10/2007 2:55 pm): I cross posted this at Daily Kos. The post climbed to the Daily Kos “Recommended Diary” list and as a result there is a very lively discussion ongoing in the comments there. Please visit to participate in the discussion.]

Thank you for this thoughtful and beautifully written diary. I read it this morning and am grateful for your words. You have reminded us all to be mindful of battles of the past as we fight to change the current course of history.

—-
Mashuqur Rahman [http://www.docstrangelove.com] is one of the highest read Bangladeshi-American bloggers. Critically acclaimed for his incisive analysis on Bangladesh, US foreign policy and dedicated advocacy of human rights.


3 Responses to “The Lion In Winter”