For all those whose cares have been our concern,
the work goes on, the cause endures,
the hope still lives, and the dream shall never die. 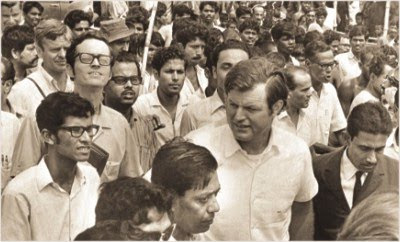 Like a childhood friend and mentor who has drifted apart but always held a special place in your heard, Senator Kennedy is being remembered in Bangladesh, and by the Bangladeshis in Massachusetts and rest of USA.

Kennedy’s commitment to social justice is documented in every civil liberties legislation, every vote he cast, every immigrant he helped. But his stance in 1971, when he opposed the policy of his country and took the side of the people of Bangladesh still struggling for independence has a personal meaning to the people of Bangladesh and to this author.

Sen. Kennedy, after returning from India in August, told the senate:

A traveler today in eastern India cannot help but see, smell, and feel this misery. It is etched in the faces and lives of refugees in countless ways. It is the malnourished child hanging limply in its mother’s arms – one child out of a half million who, in a matter of hours or days, can easily die from the lack of protein and adequate medical care. It is a young girl, quivering in a refugee camp in Tripura, still in a shock after seeing her mother and father slaughtered by Pakistani troops. It is a 14-year-old boy in Jalpaiguri hospital, whose face is contorted from the pain and anguish that he has experienced since he saw his family shot before his eyes and since he received a bullet wound in his spine which has paralyzed him for life. And it is the expression of hundreds of thousands of refugees living in sewer pipes on the outskirts of Calcutta, while overworked relief officials struggle to provide some food and shelter and hope for a needy and hopeless people.To drive the roads of West Bengal is to tour a huge refugee camp. For miles along the old Jessore road north of Calcutta toward the border of East Bengal, literally millions of people sit huddled together waithing for food, or line up in endless queues for refugee registration cards, or simply encamp on the roadside under hastily constructed lean-tos. And each day their number continues to grow.

Nothing is more clear, or more easily documented, than the systematic campaign of terror-and its genocidal consequences-launched by the Pakistani army on the night of March 25th. Field reports to the U.S government, countless eye-witness journalistic accounts, reports from international agencies such as the World Bank, and additional information available to the Subcommitte document the continuing reign of terror which grips East Bengal. Hardest hit have been members of the Hindu community who have been robbed of their lands and shops, systematically slaughtered, and, in some places, painted with yellow patches marked “H”. All of this has been officially sanctioned, ordered and implemented under martial law from Islamabad. America’s heavy support of Islamabad is nothing short of complicity in the human and political tragedy of East Bengal. 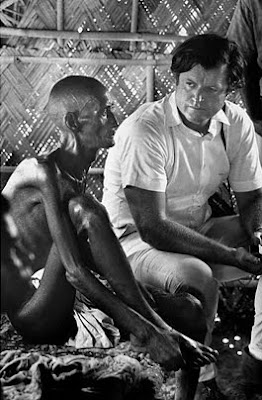 While Nixon and Kissinger were supporting Pakistan, giving them arms and sending the 7th fleet to the Bay of Bengal to give moral support, Sen. Kennedy, along with Senetors Church and Fullbright, was vocally advocating against Pakistan and for Bangladesh.

He called the world’s attention to the genocide and forced the US government to send more aid to the refugee camps in India.

Finance minister M. A. Muhith described those days in 1971 when they would get unquestioned support from Kennedy, and called this a “loss of a friend to Bangladesh.”

More recently, he was one of the signatories of a letter to the military-led caretaker government asking for speedy restoration to democracy in Bangladesh.

Ted, you were a friend of Bangladesh. This did not get you any votes, and no one could have blamed you if you did not walk in the mud of the refugee camps in the sweltering heat of August. But you did it because it was the right thing to do. And you helped us because that was also the right thing to do.

Eunice, Jack and Bobby are waiting–I know it will be a hell of a touch football game.