When we took the City Cat ride on Brisbane River, or had a view of the river from Sydney opera house or spent time in South Bank of Melbourne CBD we always thought what Dhaka could be if we could maintain the virginity of Buriganga, Sitalakhya, Turag and Balu rivers. Can fondly remember when we were in our childhood we used to come to Dhaka from Goalando, Faridpoor by Steamer Ostrich to Narayanganj and then by train to Dhaka in 1960s. Padma, Buriganga , Sitalakhya that we had to cross were of poetic beauty. Lush green villages around river banks were enchanting.

Due to unplanned growth of Dhaka in all dimensions over the last four decades we have indiscriminately misused our natural gift. That beauty of the rivers is gone. Rivers are polluted to such an extent that no aquatics can survive. . Grabbers and encroachers have grabbed major parts of the rivers. The rivers are dying. If people of Dhaka do not rise in one voice in another 10 years Dhaka will become inhabitable a barren city. Rivers around Dhaka will be the events of the past. Our future generation will curse us.

Those lucky persons who had opportunity to visit major European, Australian cities must have noticed that major cities and many civilization have developed and thrived being situated on a the bank of river. How carefully the rivers have been kept free of all nuisances that we observe in case of Bangladesh and some regional countries. Be it London, Paris, Amsterdam, Rome, Venice, Frankfurt, Sydney, Brisbane, Melbourne all have so much of contribution of the rivers. Our Dhaka was naturally blessed with four lovely rivers Buriganga, Sitalakhya, Turag and Balu encircling it. Name of Dhaka used to be fondly remembered with that of Buriganga .It was and still it is the gateway to Dhaka from southern Bengal. Several canals criss crossing Dhaka could be ideal for water drainage and flood control of Dhaka. But none cared for keeping the canals alive; none cared for maintaining the health of Dhaka Rivers. Canals are mostly non existent; rivers are extremely polluted with toxic wastes of tanneries and untreated industrial refuse and sewerages. Not only river banks, rivers are also occupied by grabbers. Not to speak of using river water for any purpose even boat rides in the rivers have become hazardous.

We have so many intellectuals busy back scratching one other; we have noble laureate, lawyers of international reputation. We have veteran politicians, patriotic environmentalists, historians. We find everyday people in expensive attire talk wisdom in TV talk shows and seminars. We have two feuding ladies branding each other vultures in Bangladesh sky. But our rivers in Dhaka are dying. City is getting inhabitable. Is it not a failure for our policy makers, planners. Is not a great shame for all of us?

Dhaka is branded as one of most polluted, one of the dirtiest city of the world. It should not be even one 10th of Melbourne where we live but it has ten times the populations of Melbourne. In few years if we are not careful Dhaka may even reach the total population of Australia. In 38 years no government could create any infrastructures outside Dhaka which could stop influx of populations to the capital. About 30 % of floating Dhaka population live in unhygienic slums which is one of major reason of city pollution, rivers and water way pollution as many of them live on river embankments and dykes. Every year victims of flood, river erosions come to Dhaka and sheler in slums. All job opportunities, education facilities, health care, sporting events; major cultural activities are Dhaka based. So people crowd in Dhaka. These makes cunning and influential property builders grab lands on river banks or even reclaim from rivers. The river authority, Rajuk and Municipal Corporation are either corrupt or incapable to stem the rot. 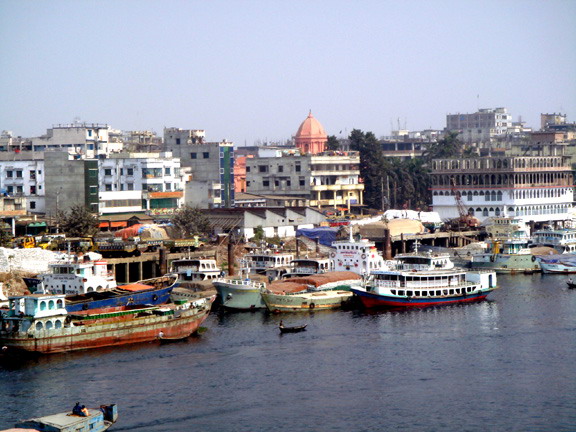 Major industries like tanneries, textiles are constantly dumping untreated or undertreated toxic industrial refuses to river streams, untreated sewerage; solid municipal wastes are also dumped in uncontrolled manners. It has been reported in Bangladesh media that river beds have 3-4 filled with polythnes. So the rivers are getting squeezed from all direction – top, bottom, left and right. BOD has gone down drastically making the rivers inhabitable for any aquatics.

Many major property builders getting permission from Rajuk are reclaiming land from rivers to build housing complexes .Rajuk has allegedly ignored their own policies and guidelines. Now if any government organisation goes for massive actions to free river banks or rivers then there may be judicial complexities.

Off late civil society appears to be forming unity. There must be some actions in the ensuing parliament session .All parties must unite to end unoccupied occupation of Dhaka Rivers, regenerate all city canals.

If we can free river banks, we can build embankments and circular roads around the city. We have to relocate tannery from Hazaribagh to its designated location and set up treatment plant for its wastes, we must relocate all other polluting industries out of the city in different locations. No industry should operate without proper treatment facility. An all party River Commission with line professionals must be set up as vigilant team to police against river occupation, pollution. Media must continue play very pro active role.

Rivers will need extensive appropriate dredging to clear the bottom of polyphone and increase navigability. In 10 years Dhaka must change to surface water almost exclusively and all deep tube wells must be put out of operation. Sub surface water table must be regenerated to save Dhaka from vulnerability of earth quake.

There can be water recycling for industrial use and irrigation in and around Dhaka. If there can be properly planned Water Recycling the polluted water being flown to rivers can again be treated in Advanced water treatment plants and reused . It will also protect the health of the rivers. This writer has worked for two years in the massive recycled water project of Queensland. The treatment of waste water in advanced water treatment plant by reverse osmosis process produce as good as or even better than municipal water. Première of Queensland Ms Anna Bleigh did not even hesitate to drink that water when we commissioned the plant. If municipal and city waste water can be piped to plants and after treatment can be piped back to end users at least 50 % requirement of City water can be met by recycled water alone. If Bangladesh Government is interested it can share experience and expertise with Australian Government.

Dredging of rivers to ensure all seasons navigability, freeing river banks and river proper from illegal occupants, relocating polluting industries an ensuring proper treatment of industrial refuse, recycling waste water, municipal solid wastes for reuse can change Rivers in 3-4 years. For our survival, for the sake of better living of our future generation we must do it. There must not be any crisis of fresh sweet water if rivers are healthy,. We can treat river waters, treat and use recycled water. Deep rivers will protect Dhaka from seasonal flooding. Rivers can be best mode of transportations for goods and people. Circular roads around city can be linked with all city gates for coming in and going out of the city much comfortably.

Our concern is for sick and grey Dhaka Rivers, our concern is for Dhaka the historic city of great tradition. The city that we all love. We must let it live peacefully. The Rivers of Dhaka must live and die with the city. We used to read Dhaka stands on the River Buriganga. Let our next generations after another 500 years have the pride to live in a city with beautiful and clean rivers flowing around it and through it.

Let this be our national slogan – save rivers, save Dhaka and save Bangladesh.

Kh A Saleque (Saleque Sufi) is one of our guest writers, He is an Engineer by profession and lives in Australia. Read more posts by Kh. A Saleque.


11 Responses to “Save Rivers, Save Dhaka, Save Bangladesh”