We start this post with our sincerest condolences to the friends and families of the fallen. For the record, we are calling this a terrorist act: not a mutiny.

In any war, the first casualty is always the truth, and it is happening in Bangladesh right now. We believe truth and justice are the best ways to show respect to the memories of the dead, so let us go back and try to do that.

We start with a timeline of the incidents. Please note that this is not a blow-by-blow account but the major points. While this timeline can, and is, self-standing, it is also an integral part of our next article, Accountability and Distorted Truths.

Major Monir describes a slightly different timeline, but that the major points are the same, and the differences are understandable in the fog of war. 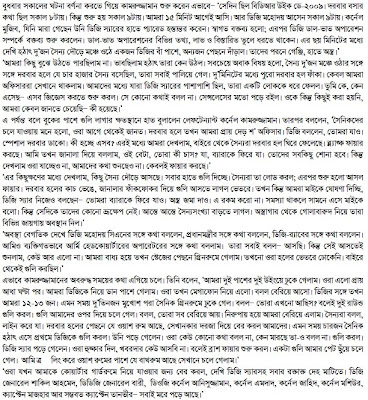 Various civilians injured or killed by gunfire or splinters from mortar as far as Dhaka university.

Army units take position near New Market around 11:20 AM, and attempts to enter gate 3, but retreated after stiff resistance and massive fire from BDR

Bodies of Dhaka Sector commander Col. Syed Mujibul Haque and 36 Rifle Battalion commanding officer Lt. Col. Enayet’s dead body was discovered near the Nababganj drainage canals (the drain runs under Pilkhana). One of the dead bodies had a letter from presumably the BDR soldiers that asked that the message be sent to all media that they have been oppressed by army officers, and their backs were against the wall.

Prior to that, BDR issued ultimatums that if the Army came into Pilkhana, there would be massive bloodshed. They also demanded that the Army helicopters be moved away.

Prothom Alo reported that the some of the BDRs were asked about the status of the DG around 2:30 PM, and they reported that he, as well as another 150 officers were under arrest. We now know that to be untrue.

Jahangir Nanak and Mirza Azam enter pilkhana after some negotiation via mobile phones and through TV channels. MPs Waserat Hossain and Mahbub Ara Guini statys outside the gate. 14 BDR personnel, including Deputy Assistant Director Touhidul Islam, goes to the PM’s residence for a meeting. (this is the same Touhid Lt. Col. Kamruzzaman said saved his life)

A BDR solider announced on a loudspeaker that they will give their life but will not compromise on their demands. This was on Moneshwar Road, about 200 yards from the Darbar hall, where the killings started. Civilians present there clapped and cheered at that statement.

Prothom Alo reported that while all other gates were covered by the Army, this gate had no Army presence.

Prime minister Sheikh Hasina announces general amnesty. Before this, she met with the 14-member BDR team from 3:45 – 5:45 PM

As a result of the amnesty announcement, firing stops briefly. Many injured, including women and children come out of the BDR headquarters.

12 BDR members in meeting with negotiators at Ambala Inn in Dhanmondi. They demand that army personnel be withdrawn from Pilkhana as precondition for laying down arms. Army units start moving back by 10:40 PM.

Negotiation meeting ends at 12:10 AM. Sahara Khatun enters Pilkhana at 12:15 AM

Sahara Khatun exits Pilkhana with at least one injured officer, and about 40 other family members.

After that, we accelerate our narrative:

Another team lead by Abdul Jalil meets with the rebels. Rashed Khan Menon asks the rebels to let the family members go, and if necessary keep the politicians as hostage Between 50-60 family members were released after that

Afran, daughter of a Major Zia, was released.

BTV camera men invited inside to witness and record the surrender of arms.
200 hostages released

Final stages. Hasina in meeting with the 3 service chiefs.
Surrender and end of mutiny announced at 6 PM


9 Responses to “BDR Massacre: A Timeline”